One Day Without Us – stand with migrants! 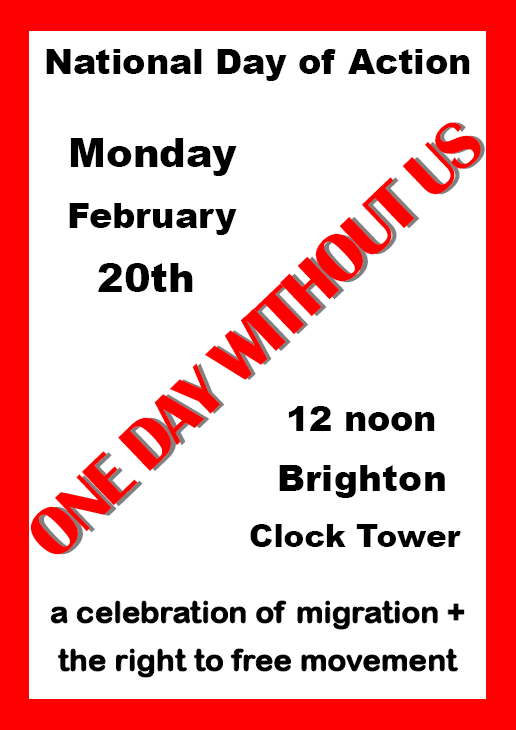 Since the June referendum, both EU nationals and non-European migrants living in the UK have come under enormous pressure. Inflamed by anti-migrant hostility from the media and politicians, racism and prejudice are being openly expressed, accompanied by a steep rise in hate crimes – including murder.  Benefit claimants – the unemployed, disabled people, lone parents and the low paid – have now been joined by migrants as scapegoats blamed for all our ills, rather than the corporate greed, grasping landlords, feckless bankers, media tycoons, tax dodgers and all those profiteers who are driving the gulf between rich and poor ever wider and destroying our society.

Our government of millionaires and landlords now plan to use Brexit to launch a further assault on the rest of us. Human rights and environmental protections can be cast aside, as once again profit is put before people. Three million EU citizens who have made their homes in the UK face losing their rights. One million are threatened with deportation.

We cannot just stand by and allow this to happen. On the UN World Day of Justice we are inviting migrants from across the world to take part in a nationwide Day of Action to show how important migration is for our society and to defend the principle of free  movement.  This is also a great opportunity to convince more MPs to join the opposition to a headlong rush into Brexit disaster.

We invite British-born citizens to stand alongside the men, women and children who are our doctors, nurses, carers, students, teachers, farm workers, scientists, shopkeepers, restaurant staff, taxi drivers, writers, workmates, classmates, friends, neighbours, family and partners. Whatever your nationality and place of origin join us and make February 20th a day of protest, solidarity and celebration.

For 24 hours, take time out from your normal activities. Close your business, leave your classes, march or have a party, hold a meeting or a rally. Take the day off work if you can. Wear badges and armbands, put up posters or give out leaflets, make placards. Hold mini demos at lunch or tea-time, have a five-minute silence, stand outside your place of work for ten minutes or an hour or more. It’s time to stand up and be counted. Let people know who you are and what you do.

Britain was created by migration. Whether you are an immigrant or not, whether your family arrived 4, 40, 400 or 4000 years ago, join us in celebrating and defending our multi-cultural society, our  migrant colleagues, neighbours, friends and fellow citizens, and the  human right to free movement.

Fighting the assault on welfare since 2010
View all posts by Brighton Benefits Campaign →
This entry was posted in Action, Events, Migrant rights, Solidarity. Bookmark the permalink.