Public meeting: Migration Ethnicity & the aftermath of the referendum 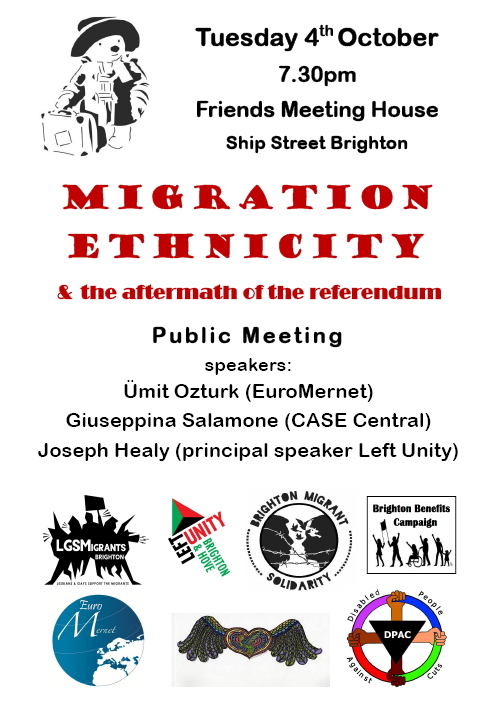 We live in a society created by migration, a land populated by people from many places who arrived over millennia, individuals and communities who came to find a new life, to work or to trade, to flee war and oppression, brought here as servants or as slaves. The flow has never been one way and emigration, whether voluntary or enforced, increased with colonialism. Yet until the turn of the 20th century there were virtually no restrictions on migration or free movement, despite constant wars and conflict, and large numbers of migrant workers, traders and communities from all over the world settled in London and other cities.

This changed with the 1905 Aliens Act (primarily intended to keep out Jews from Eastern Europe fleeing persecution). Restrictions have proliferated ever since,   usually as a reaction to popular fears driven by media scare-mongering, as well as incitement from the political right, and all of it more or less racist. More anti-immigrant legislation has been enacted in the last decade than ever before.  Now with the Brexit vote we are faced with a potential lockdown on free movement of any kind, alongside a rise in hate crime and racial abuse directed not only against EU citizens but anyone who might be seen as ‘foreign’.

Why has this happened?  There is evidence that a rise in rampant nationalism is directly related to social decay, as people become frustrated and angry at being  unable to access a decent life. Over the past decade the rights of ordinary people – employment, housing, healthcare, education, justice, social security – have been increasingly denied with the introduction of ‘austerity’ and the giving of trillions in public money to bail out banks.

Yet we see the blame falling not on feckless bankers but on migrants, benefit  claimants, disabled people and the poor. Nationalism is a useful tool to divide and rule, to misdirect attention from those actually responsible – the millionaires and capitalists who put private greed before public need, who pay low wages and exact high rents, who run the media as well as the government. Is it any surprise that they encourage the rest of us to blame each other?

At the same time, the Brexit vote has highlighted endemic deep-rooted prejudice within our society, and not only in working class communities faced with social meltdown. Racism is institutionalised, fostered by ignorance and narrow education, maintained by a culture of blame and lowest-common-denominator national pride, and inflamed by the media and the right.

How do we stop this? By mass education, by challenging prejudice and lies, by countering abuse and hate-crime at every opportunity, by organising to defend communities and individuals under attack, and most of all by the development of solidarity. Solidarity with workers wherever they come from and with all those  struggling for their rights. We may feel helpless as individuals, like a tiny cog in a vast machine, but brought together we can create change. In the final analysis we all have a common interest, and a common humanity.

Join us in finding out the facts, hearing the experiences of migrants and others, and working together on strategies for the future.

Fighting the assault on welfare since 2010
View all posts by Brighton Benefits Campaign →
This entry was posted in Uncategorized. Bookmark the permalink.