During its last term in office, the Labour government introduced the Work Capability Assessment, administered by infamous poverty pimps Atos. It was supposedly ‘a test of what you can do, not what you can’t’ … The result was that many disabled people were forced off the benefits which enabled them to live. Those who failed could be put through a stressful appeals process, and if successful, dragged back within months to be tested again.

In the years since, successive governments have overseen accelerating benefit cuts as part of the destruction of the welfare state and other public services. Cuts have caused increasing physical and mental ill health, and rocketing numbers of deaths and suicides among disabled claimants. At the same time the millionaires in parliament and in the media have determinedly scapegoated claimants to justify bullying them into hunger, homelessness, hopelessness and destitution, resulting in a rise in hate crime. 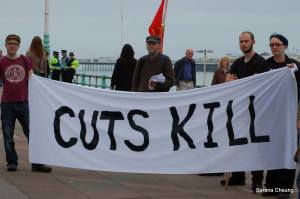 Join Brighton Benefits Campaign and Brighton Disabled People Against Cuts in saying ENOUGH IS ENOUGH! In work or out of work, disabled or not, we all have a right to live decent lives. Social security was intended to aid us in doing so when we can’t earn a living ourselves. It’s a right not a privilege or a reward. 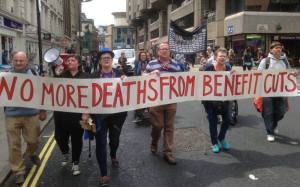 Fighting the assault on welfare since 2010
View all posts by Brighton Benefits Campaign →
This entry was posted in Action, Demonstrations, Disability rights. Bookmark the permalink.