Workfare at the Synergy Centre continued

Posted on May 28, 2016 by Brighton Benefits Campaign 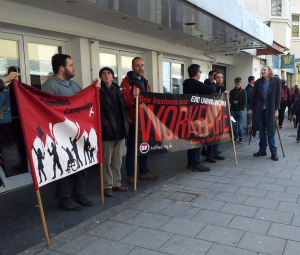 Following a meeting between its representatives and those of the Brighton Hove & District Trades Council, Brighton & Hove Green Party and the Brighton People’s Assembly, the Synergy Centre issued a statement BrightoningLivesMay2016 which has been seen by some as a commitment to withdraw from workfare.

Brighton Benefits Campaign has replied to the statement, questioning this supposed commitment (which would not have been forthcoming at all if various organisations had not threatened to boycott the Synergy Centre unless it withdrew).

The Synergy Centre is not simply an odd charity that uses workfare. By hosting and supporting the Brightoning Lives project and by its acceptance of Community Work Placements, it has chosen to be an integral part of the government’s workfare project and its ideology. The reasons are:

1. Workfare is part of the government’s campaign to demonise claimants and to mystify the real causes of unemployment. The Synergy Centre is happy to contribute to this propaganda, by stating on its website that the benefits system affects claimants’ ‘behaviour’ and makes them ‘stick with unemployment’, and in the statement that workfare is ‘helping people into employment’. The Synergy Centre’s involvement in workfare is entirely consistent with its stated ideological position.

3. The Synergy Centre has rescued Seetec from its difficulty in placing claimants, by hosting a project whose aim was to receive claimants from Seetec. One of Seetec’s subcontractors, paid public money to find placements, set up and now runs the Brightoning Lives scheme. This is an alarming conflict of interests.

4. Seetec’s difficulties in placing claimants was the result of over six years of successful campaigning against workfare, which educated people about the implications of workfare, made the government retreat from placing claimants with businesses, and made a large number of charities withdraw from schemes – over 644 having already signed up to Keep Volunteering Voluntary. By convincing people that the Community Work Programme is acceptable, the Synergy Centre is undermining these gains, and sabotaging the ongoing campaign by Boycott Workfare which is specifically addressing the CWP.

5. The statement that Brightoning Lives does not replace jobs and does not make profits is misleading. Brightoning Lives asks clients to pay for their services and also competes with small businesses such as decorators, dog walkers and gardeners. Claimants decorated the Synergy Centre for free, increasing its value. All this would be pure profit because they are not paid for their labour. Also, by their own admission, Brightoning Lives has ‘financial ties to the CWP’.

6. The statement’s claim that claimants can return to Seetec sanction-free is questionable, and in fact is countered by stating that participants “are not forced against their will to attend – from the outset they are given a choice to either remain or return to Seetec to be placed elsewhere.” In other words claimants are given the choice to attend workfare at the Synergy Centre or to perform it somewhere else, or to sit in the Seetec office for 35 hours a week doing nothing. They are not given the choice to not attend at all, and by its involvement the Synergy Centre is helping to prolong this situation. We know that claimants attended the project in fear of sanctions. Some have complained that they have been forced to do mind-numbing and harmful activities eg. cutting brambles without gloves, without any health and safety considerations.

7. The termination of the scheme is not the same as a conscious withdrawal from it. When Brighton Benefits Campaign delegates talked to the Synergy Centre’s directors about ending their connection with workfare and signing up to ‘Keep Volunteering Voluntary’, this was treated with utter contempt. The Synergy Centre’s refusal to sign up to the Keep Volunteering Voluntary agreement means that they can ‘withdraw’ from this scheme and enter into another one later. The Synergy Centre is continuing to use workfare as long as the scheme lasts and the fact that this scheme terminates does not change their position in principle.  It is absurd that the Synergy Centre is committing to a ‘transitional’ period that will end in September – why does it take four months to withdraw from a scheme they have only been involved in for two months to begin with?

From everything that they have said, it is clear that Brightoning Lives / Synergy Centre are not committed to opposing workfare, and have instead justified workfare schemes. They have refused to sign the Keep Volunteering Voluntary agreement, showing contempt for the campaign. They are undermining the war against workfare which Boycott Workfare, Brighton Benefits Campaign, SolFed and other groups have been successfully waging for the last six years.  We will continue to work for a boycott of the Synergy Centre by radical and left wings groups.

Fighting the assault on welfare since 2010
View all posts by Brighton Benefits Campaign →
This entry was posted in Workfare. Bookmark the permalink.

3 Responses to Workfare at the Synergy Centre continued