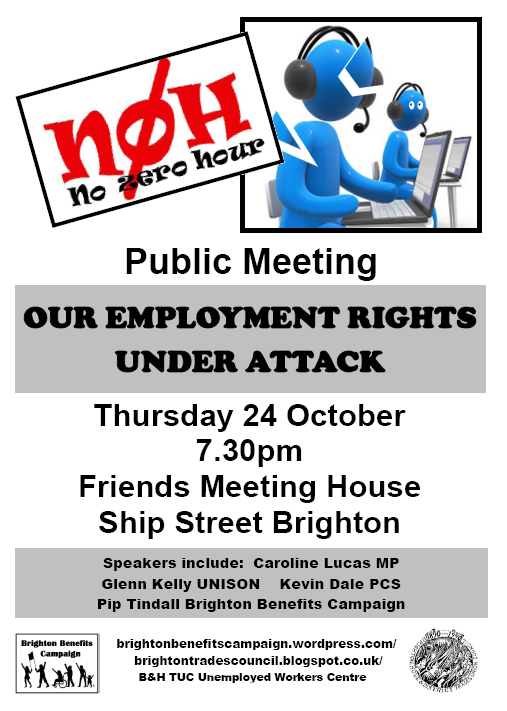 Zero hours contracts are increasingly replacing formal contracts which specify hours of employment. Under zero hours employers have no responsibility to provide any work at all, so their workers are placed in a very precarious financial position.  They can be called in to work or left without pay, or even have their hours cut as a way of disciplining them.  Zero hours contracts make it much easier to sack workers and to deprive them of employment rights.

In addition, many private companies and ’charities’ are already making vast profits from the unpaid labour of thousands forced to work for their benefits (workfare) and this is set to increase.  Far from cutting the number of unemployed, such corporate welfare is undermining secure paid employment, reducing pay and conditions, endangering health and safety, and stopping workers organising for their own protection

When Universal Credit is introduced many low paid and part time workers currently on in-work benefits such as tax credits will find themselves expected to work extra hours to reach  certain income levels.  With an army of desperate people  looking for any work they can get, pay and conditions will drop further. Real jobs will become even more scarce and many will find themselves forced into workfare.

Taken together with the continuing restraints imposed on trade unions, the growth in zero hours and the introduction of benefit conditionality represent a massive attack on our employment rights.

To fight these attacks will take solidarity between the employed and unemployed, the waged and the unwaged, students and their staff, those with a contract and those without, and it will need the full support of our trade unions.

This is an attack on all of us!
If we fight it together we can win!

Fighting the assault on welfare since 2010
View all posts by Brighton Benefits Campaign →
This entry was posted in Employment rights, Workfare. Bookmark the permalink.

2 Responses to Zero Hours & Workfare: Our Employment Rights Under Attack!