The Labour Party is called the Opposition – tell them to start acting like it! 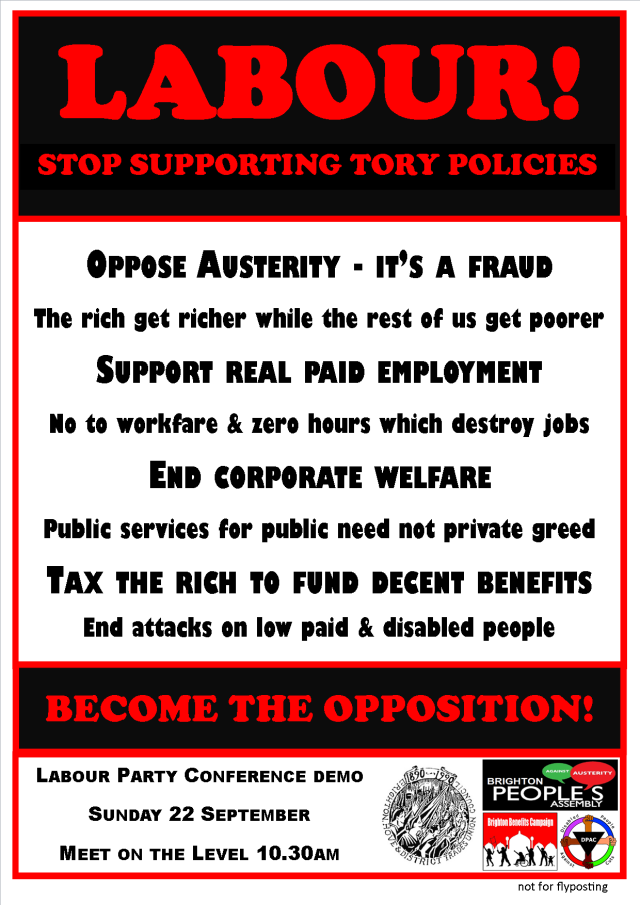 When a Labour government swept to power in 1997, it could have restored those rights which had been under attack since the 1970s. Instead it chose to ally itself with corporate tax-shirkers, company bosses, grasping landlords and rich investors, to turn Britain into a paradise for the privileged.

Now we have a Coalition intent on breaking open every last part of our public services for private profit, and threatening millions of us with homelessness and destitution.  Our rights to secure housing, employment, healthcare, education, justice and social security are all under attack, while divisive propaganda is used to blame the worst off and turn us against each other.

Yet Miliband and Co. just stand on the side-lines or actively cheer it on, because Labour still agrees with every cut, every sell off, and every assault on the rights of  working people.

Labour supports cuts in the name of austerity.  Despite the fact that the financial crisis was due to the gambling of greedy unregulated bankers and that trillions of pounds was spent on bailing them out, it has been used as an excuse to launch a vicious attack on the public sector.  Since the crisis the income of top earners has rocketed while the rest of us face frozen pay, crippled services, and job and housing insecurity.

Labour scorns those reliant on benefits.  It was Labour that introduced US-style workfare schemes, which it still approves of, and employed Atos to force the sick and disabled off benefits  through the iniquitous work capability assessment.  No wonder Liam Byrne is promising to help the Tories salvage the shambles of  Universal Credit, which is planned to punish all those on low incomes.

Labour has turned its back on workers.  Far from reversing Thatcher’s assault on employment rights, Labour openly got into bed with business.  Workfare in particular represents a state handout to the bosses while attacking real jobs – substituting dole slavery for paid work and threatening pay and conditions, health and safety, and the right to organise.

Labour supports privatisation. Hardly surprising, after all it introduced academy schools, tuition fees, NHS foundation trusts and the Private Finance Initiative.  Dodgy private companies like G4S have been paid millions in public money.  Labour talks of saving the NHS in 2015 – but there won’t be anything left to save.

When will Labour stop embracing Tory policies and remember who it is supposed to represent.  We already have one major party for the wealthy and privileged, we don’t need another.

LABOUR IS CALLED ‘THE OPPOSITION’  – TIME TO ACT LIKE IT!

Meet at the Level at 10.30am.  Wear black if possible. Follow the coffin representing the death of our rights in a slow march to the Brighton Centre.

Directly following the demo.  Join us in taking action against the private companies and charities making use of corporate welfare.

Fighting the assault on welfare since 2010
View all posts by Brighton Benefits Campaign →
This entry was posted in Action, Demonstrations, Housing rights, Universal Jobmatch, Workfare. Bookmark the permalink.