The government would have us believe that the growing army of the unemployed – including over a million under twenty-fives – are ‘scroungers’ who will avoid work at all costs.  They conveniently ignore the fact that for every job vacancy there are tens or even hundreds of applicants. And that at the same time, increasing numbers of sick and disabled people and single parents are being forced into the job market.

In the right wing media, workfare is portrayed as a way to prevent the ‘lazy’ unemployed getting ‘something for nothing’ by forcing them to ‘volunteer’ or face sanctions. To those signing on, particularly young people, it is promoted as work experience that will improve their chances of employment.

Of course in reality, workfare provides free labour for companies such as Poundland and other large retailers, enabling them to make yet more massive profits, and to cut the jobs, wages and conditions of their paid workers.    Last Saturday activists from Brighton Benefits Campaign, together with members of Brighton Solidarity Federation and other supporters, took part in their first picket of the Poundland store in Western Road Brighton, in protest against this misuse of the unemployed as unpaid labour under the workfare scheme.

Over a thousand leaflets exposing the truth behind the government’s propaganda were handed out to shoppers outside the shop.  Many showed interest and stopped to discuss the issue.  Some  shared their own experience of workfare.  We were told by one woman that her daughter worked for a Tesco store where workfare had resulted in paid staff being told ‘no more overtime’.

The Poundland manager came out almost immediately and tried to argue the case for workfare as ‘work experience’. Within a short time a whole group of Poundland employees were standing just inside the doors either joining in or listening as we explained how exploitation of the unemployed as free labour is an attack on those in work as well as those without, and that all work should be properly paid.

Interestingly, although the store manager obviously felt somewhat besieged, there was no sign of the police, not even community officers who have turned up at other pickets. Or maybe they were all too busy at the Brighton match!

More pickets are planned as the campaign hots up.  Hopefully this kind of action will be taking place in many other places,  as unions and anti-cuts groups join the fight against workfare. 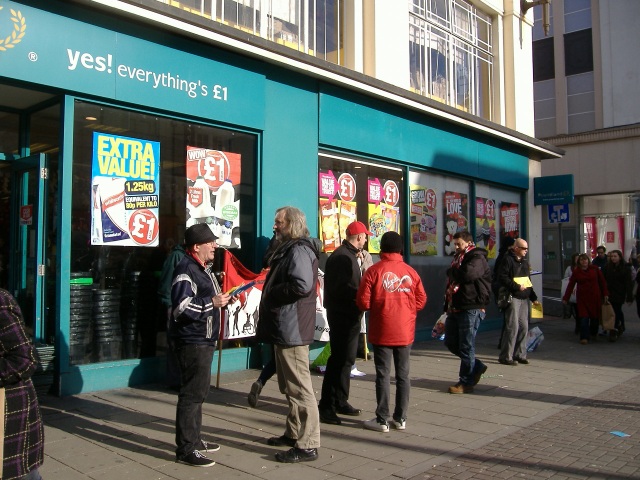 Fighting the assault on welfare since 2010
View all posts by Brighton Benefits Campaign →
This entry was posted in Demonstrations, Workfare. Bookmark the permalink.